Welcome to Aden’s blog! I’ve got a lot to say today, but let’s get the really important shit out of the way right here. I need a better name for this blog. Something catchy, cool and ideally properly descriptive. I’d love your suggestions so please email us and let me know if inspiration strikes. But can we try to maybe surpass “Omegablog” as the bare minimum standard for suggestions? Thanks.

I. Introduction and goals

On to the main point. The new Dota Pro Circuit. If you haven’t listened to Episode 45 yet, you’ll hear our thoughts on the changes there, but here I want to give you my thoughts on what a DPC season should look like*. To do that, let’s start with the idea of goals/limitations.

*Please note that I’m talking big picture about schedule and purpose. I’m not going to talk about single vs double elimination (I like double) or different group stage formats (I hate GSL) etc.

So to sum it up, I want transparency, narratives and to provide opportunities for lower tier teams without changing the basic tournament structure of Dota.

II. What Valve is doing next year

Valve is implementing a 5 major 5 minor system. The process goes Major qualifiers, Minor qualifiers, Minor then the Major. There will be no invited teams, so the Major qualifiers determine 15 of the 16 teams at the Major and must include at least 1 team from all 6 regions. The Minor qualifiers then exclude all teams that qualified for the Major, and the winner of the Minor gets the final spot to the Major. Valve is also changing the point structure so that every team at the Major earns points (in theory, this should make the point distribution less top heavy). Additionally, Valve is going to assign points to teams, not players. There will be no roster lock, and if teams make a change, they will forfeit 20% of their current points for each change made.

I have two major problems with the way Valve is structuring its new DPC. First, let’s talk invites. The biggest complaint this year about invites was that tournament organizers assigned them in any way they wanted. Then at the SuperMajor, invites were assigned by an objective measure of DPC standings (in April), but everyone objected to that because it gave invites to EG, Navi, and OG, who were all floundering. The first option flies in the face of our stated goal of transparency in invites, and the second essentially continued to reward teams for something that happened back in October. So Valve decided no invites! That, to me, makes no sense.

The second complaint I have is with the Minors. One tangential issue with the current setup is that if there are no big name teams at Minors, who is going to sponsor them? Valve, of course, has tried to counter that by making the winner an invite to a Major and thus a narrative is born. However, I have a bigger problem. Why are the first invites to Majors being given by qualifiers and fewer invites given by Minors? Minors being on Lan and having cross-regional competition seem like they should be a bigger method of qualifying for a Major than regional qualifiers would be. I also think that there should be more Minors than Majors. Think of the ATP tour for tennis. There are 4 majors and 9 Masters 1000 events. That, to me, seems like the right ratio of 1st to 2nd tier events.

IV. My vision for a better DPC

Now I have to propose my alternative instead of just poking holes in Valve’s ideas. Let’s start with something easy: Team structure. I love points going to teams. Sports work by creating a relationship between a fan and a team. I also love the chance for players to change teams without it being a death knell for that team. A 20% point reduction seems totally appropriate for each individual change. But you need a deadline before the start of TI qualifiers, otherwise the 20% penalty will be meaningless for almost all teams at the end of the season. For example, this year only VGJ.Thunder would have lost their invite by losing 20% of their DPC points. Any of the other 7 teams could have changed a player (VP could have changed 4 out their 5 players and still qualified). I would guess after the third Major might be an appropriate deadline. Or you could add escalating penalties — for example, after the third Major any additional changes cost 35% of your points.

In my system, the very top teams don’t appear at Minors. For example, after Epicenter this year, the Minors would get teams like Newbee, Secret, Mineski, and OG, but no LGD, Liquid, or VP (or FlyToMoon…). The downside is that we won’t necessarily get the tier 2 type of team actually having a good shot at winning Minors. In the proposed system, Minors are truly tier 2, and I’ve seen numerous concerns about who sponsors those Minors when no one will watch. I think my idea is a better compromise between some attractive teams and some tier 2 teams. I do wish there was another layer, maybe called regional LANs, below Minors for lower tier teams to play, but I don’t think that’s in Valve’s purview, nor am I convinced it’s economically feasible.

This is a big problem. Basically, if you finish 2nd in a major, you’ve got a really good chance at getting a direct invite. I don’t have an obvious solution for this except having more tournaments, and we tried that this year. I think this is where the huge advantage of a league structure comes into play.

I think we will see two kinds of 3rd party tournaments that come into play here. There are 8 w 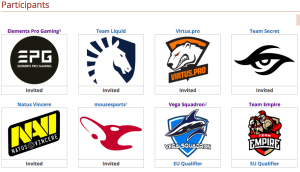 eeks between majors, and tier 1 teams will want to play at least one tournament in that time! Hopefully, we would get tournaments like The Summit, Captain’s Draft, and Dreamleague to fill in those gaps. I can especially imagine Dreamleague, which is traditionally mostly EU/CIS teams and, therefore, a relatively low travel proposition fitting into one of those breaks. To the right is Dreamleague season 7: pretty fun lineup! I think we would also see more no qualifier 4-8 team invitationals popping up. Maybe even more show matches. Think of the Betway King of the Hill matches from just over a year ago. We had a two NA series and a couple of CIS matchups. You up the prize money a bit and decrease the number of tournaments teams are attending, and those might become Liquid vs VP for 25k on a Friday night? You know I’m watching that!

I’m not sure this is a huge problem, but I also think my schedule is pretty much the fastest it can logistically happen. We’re talking two weeks between the final 6 qualifiers for a major and it starting. That’s a reasonably tight turnaround, but it would have to be done. You could also, in theory, cut the cycle down a week or two if you wanted to push it.

VI. Thanks for reading!

Thank you for reading my first ever blog post. Let me know what you think! I plan on doing these from time to time and I’d love your feedback!